Along the northern Pacific coast, shrouded in mist, grows California’s majestic coastal redwood forests. These remnants of a woodland, once growing unobstructed from Oregon down past Monterey, are the legacy of an ancient past that is rapidly fading. However, thanks to conservation groups like the Save the Redwood League and Redwood Parks Conservancy, there is still hope for the magnificent giants. But just what makes the redwoods so special? 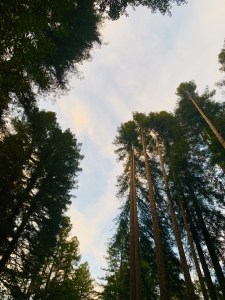 The murky coast of northern California is home to giants. Ancient coastal redwoods grow to awesome sizes. But just what is a redwood’s secret to success? How do they grow so tall and old? To discover more about the tallest tree species on Earth, check out these seven redwood facts:

1: Redwoods Only Grow on the Northern Pacific Coast

The coastal redwood gets its name because it only grows near the coast. Although today they are only found on the Western seaboard of the United States, there is fossil evidence that redwoods were once found on the coast of Europe, Asia, and even Africa, many hundreds of centuries ago. Slowly, over time, climate change and coastal rain patterns limited redwood forests’ range to their current boundaries.

If you travel inland more than twenty-five miles inland the redwoods start to thin out. This is because a redwood tree gets almost forty percent of its water from the coastal fog that rolls in every night over the California-Oregon coastline. They aren’t the only tree able to do this, but drinking in that fog is especially important to a redwood tree that can grow hundreds of feet tall, as funneling water all the way to the upper canopy is arduous and time-consuming. Having a secondary source of water that provides hydration from the top-down is one of their secrets to success and allows them to grow far taller than almost any other tree. 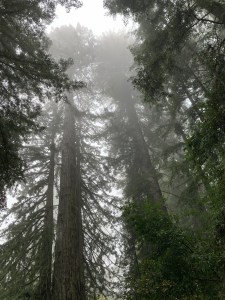 2: Redwoods Are the Tallest Trees on Earth

Redwood trees are the tallest trees in the world! The tallest coast redwood is over 380ft tall. That’s 75ft taller than the Statue of Liberty! Scientists actually believe that a redwood could reach heights of over 400 if conditions are perfect.

Although they are the tallest trees on Earth, they aren’t quite the most “massive.” Mass measures the total density and volume of an object. The massive volume of a redwood tree structure is surpassed only by their close relative, the Giant Sequoia. However, even though they aren’t quite as massive as their cousins the Sequoias, the huge size and the dense nature of a redwood forest makes the northern coast one of the largest carbon reservoirs on Earth. As the world heats up it will only become more and more important to maintain and protect the remaining old-growth forests.

The California redwood’s Latin name is Sequoia sempervirens. This translates to Sequoia ever-living. A redwood tree can grow to be one of the oldest tree species alive. They can reach ages of almost 3000 years old. This means there are redwood still living today who were young saplings when the Romans were just starting their world-conquering!

But that’s not the only reason they have that “ever-living” name. When a redwood tree experiences stress it will actually send up clones all around it in a circle from its roots. This stress could be overcrowding, erosion, fire damage, or even being chopped down to a stump. Although a stump looks dead to us, much of the biomass of a redwood tree is stored in its root system, and with all that energy it can send up clones that one day will be just as tall as the original parent tree.

Although a particular trunk may be only a couple hundred years old, the root system that supports it could potentially be thousands of years old! In our second-growth forests, a stump that is surrounded by a circle of new clones is called a family circle.

Fire has marked and shaped California for uncounted millennia. Forest fires actually play a vital role across the myriad of ecosystems found throughout California. This remains true for our coastal redwood too. Before European settlement in the 18th and 19th centuries, periodic low-intensity fires would pass through the redwoods on a natural 7-12 year cycle maintained by the indigenous Miwok and Pomo tribes. These fires would enrich the soil, clear out the sub-canopy, and provide room for redwoods to reach their true height and potential. 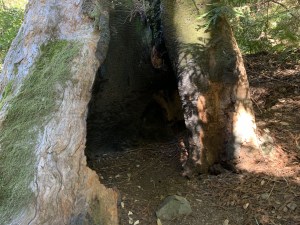 Redwoods are not technically fireproof, but what they are is incredibly fire-resistant. Their unique design allows them to survive all but the fiercest fires.  Their fibrous grooved bark can be over a foot thick and is layered on itself, making it difficult for fire to burn through the more combustible core. Redwoods also slough off their branches when they no longer receive sunlight. In an old-growth forest, the highest branches are hundreds of feet off the ground, making it hard for fires to reach the canopy. Lastly, redwoods have a high water content in their trunk, branches, and needles, and do not burn easily even if a fire does make it into the canopy.

All of these unique adaptations combine to create a hardy tree that is almost impervious to all but the most high-intensity fires. For a fire to truly damage a redwood, its best chance is to penetrate an already existing gash or wound in the truck and burn up through the interior, creating a fire cave we call a basal hallow. But even if a fire does create a basal hallow, there’s still a good chance the redwood tree will truly survive for centuries more. They truly are ever living.

5: Not Many Old-Growth Redwoods Are Left

We’ve used the term old-growth and second-growth a couple of times, but what do those terms actually mean? When Europeans first settled California, they discovered a forest that stretched unbroken from the southern tip of Oregon to Monterey. That undisturbed, never-logged, virgin redwood forest is called old-growth.

However, the mass of people that rushed in following the gold rush meant the development of a modern infrastructure. Loggers started harvesting redwoods to feed that growth. The earthquake and fire that devastated San Francisco and the surrounding counties in 1906 only accelerated that process.

Over the ensuing century, loggers cut down tree, after tree until all you could see for hundreds of miles, were stumps. New redwood clones grew from the stumps into a young forest that we call second-growth. However, not all hope is lost for the old-growth. Thanks to efforts by the conservation groups like the Save the Redwoods League some old-growth was protected from logging. It’s estimated around five percent of untouched old-growth remains.

6: The Redwoods Canopy Hosts an Incredible Amount of Biodiversity

Until recently, Scientists believed the canopy of an old-growth forest was an ecological desert. They believed that not many organisms would be able to survive that far off the ground in the unique environment that redwoods create. That all changed when exploration pioneered by Dr. Steve Sillete in the 90s revealed that an old-grown canopy hosts more biodiversity than almost any place on earth!

There are rare lichens in the canopy that rain down nutrients from above, salamanders who never touch the earth, endangered flying squirrels flitting from branch to branch, fern gardens that hang hundreds of feet above the ground, and even small shrimp who live in little puddles in basal hallows at the top of redwoods. Unfortunately, most of this diversity is contained only in old-growth forests, and it will take centuries for it to return to logged, second-growth forests.

7: A Redwood’s Root System Is Incredible

Redwood trees are the tallest trees in the world (see fact two), so you’d probably guess that they have a pretty deep root system too., You’d be wrong. For a healthy old tree, the average root system burrows beneath the surface 6-12 feet. That may seem shallow, but what they lack in depth, they make up for in horizontal spread.

A redwood root system will spread out over 150 ft  in every direction. This means that if a redwood was planted in the middle of a football field, it would reach endzone to endzone. Those roots will start interlocking and fusing with the roots of all the other redwoods around them. This complex network creates a sturdy support system, but that’s not the only thing redwood roots can do! Redwoods can actually pass nutrients and sugar (essentially stored tree-energy) through those roots to nurture a neighbor tree that might not be doing as well. Even more astoundingly scientists theorize they can utilize fungal networks alongside those root systems to pass along information using pheromones. The trees can quite literally talk to each other.

Here at Sonoma Zipline Adventures, we’ve welcomed guests into our magnificent second-growth redwood forests for decades. Helping people experience the wonder and the wildness of the coastal redwoods through zip-lining is our passion and our purpose.

We lead guided zip-line tours through the magnificent forests two hours north of San Francisco. Our thrilling eco-tours have invited hundreds of thousands of guests from around the world into the beloved forests we call home. Recently we finished our treehouse adventure! Guests can now spend the night in our forests as they experience a fully immersive experience. To learn more or to schedule your zip-line adventure, click on this link or give us a call at 1-888-499-9150!

Five Keys to a Luxury Treehouse
Scroll to top